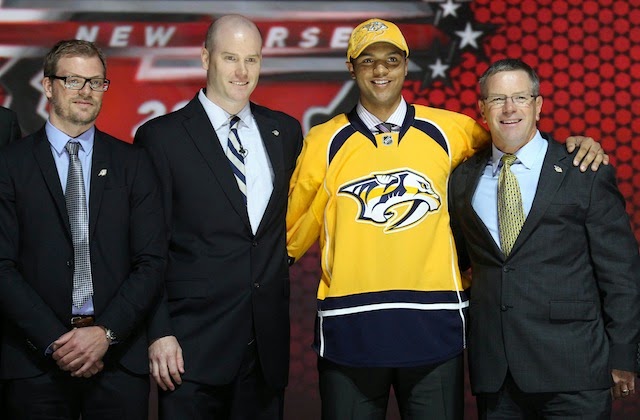 Yes, I am aware this isn't the timeliest of articles but please bear with me. If you have ever watched any televised professional sports draft you will probably have noticed that there are always players who seem to be "reaches" or players who seem to "fall" on draft day. What makes a player a "reach"? A reach would be a player like Derrick Pouliot in the 2012 NHL Entry Draft. Pouliot was ranked 17th in TSN's Rankings but the Pittsburgh Penguins stepped to the podium and selected him with their 8th pick. That's a fairly substantial jump. Opposite of that, we have the fallers. What is a faller? Look no further than Teavo Teravainen from that very same draft. Ranked 7th heading into the draft, Teavo had to wait til the 18th pick before he was snatched up by the Chicago Blackhawks (all TSN Rankings used in this article can be found here).

What I am attempting to do here is try and find if one strategy is really more effective than the other. Should you trust your gut and draft the guy that you know everyone has ranked lower than this spot? Should you be genuinely tempted to grab that player that everyone seems to be passing on? At the end of the day I expect each team to stick with their guns and draft the play highest on their own list. But maybe it wouldn't hurt however for teams look at what other people think and ask themselves "Are we way off on this?"

Let's pretend for a second that it's the 2005 NHL Entry Draft and you're the San Jose Sharks with the 8th overall pick. You're really high on this winger from the WHL named Devin Setoguchi which is great and all except he is ranked 26th overall (in hindsight you can do a lot worse with a first round pick than Setoguchi but this example still works). But you take a second to look at some other rankings and notice TSN has this Slovenian centre by the name of Anze Kopitar ranked 5th overall, interesting. In the end the Sharks stuck to their gut and drafted Setoguchi, leaving Kopitar to be snatched by the Kings at 11th overall and well the rest is history. This exercise was to help dive into that decision making process and see if history can teach us anything: 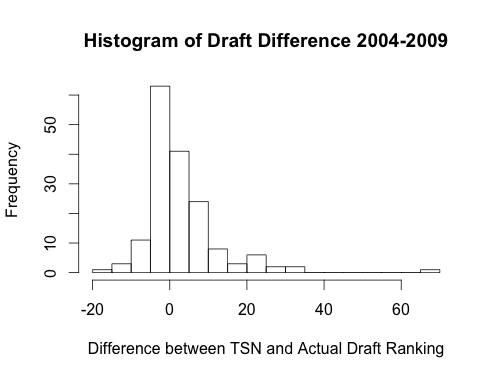 The x-axis of this histogram ranges from reaches to fallers (left to right) and gives us a good idea of team drafting patterns. Team's aren't afraid to take slight reaches (as seem by the highest column slightly to the left of 0) but aren't as eager to pick up players who seem to being falling as noted by the more spread out pattern to the right of the 0. If you aren't really up to speed with histograms, learn more here. 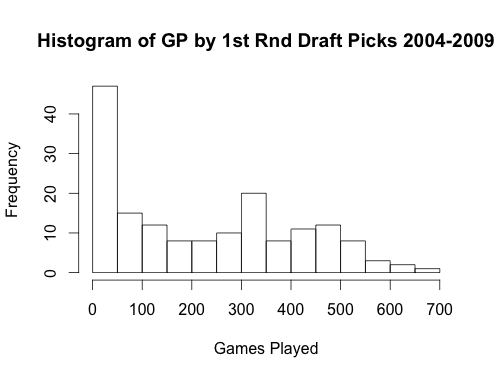 This looks at total games played by each player picked in the 1st round between 2004-2009 excluding goaltenders. Nothing really new to see here other than of course how many "sure things" never end up cracking the NHL. 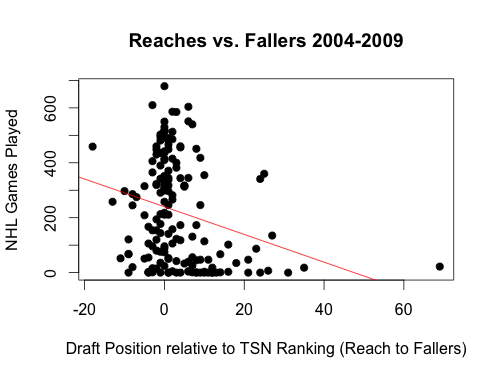 So the correlation isn't the strongest here (shown by the R^2 value) which I would have guessed just based on looking at the scatter plot. Interesting though, is the p-value being significantly less than 0.05 (you can brush up on p-values here). Essentially what we can differ from these results is that there isn't a strong correlation (shown with the low R^2), ex. just because you fall X spots doesn't mean you'll play Y amount of NHL games. There is however, some significance between a player who is a faller and one that is a reach.

Of course using simply GP as a measure of a successful draft pick is hardly fair when you simply consider that a player drafted in 2004 will by default have a higher chance of playing more games than a player drafted in 2009. So another method I used to tackle this issue is by dividing the players into separate bins based on the difference between where they were ranked and where they were selected (explained below the table).

Some quick observations of the chart, the high % Success of slight fallers in the "> 0 and < 5" bin are probably due to players like Seth Jones, who was ranked 2nd but taken 4th so while technically he fell in the draft everyone is pretty sure a player of that caliber will become a successful NHL player. Reaches of 5 spots of more seem to have very suspect returns, with only 1 out of every 5 players turning into successful NHL players, same as the 33 largest fallers who had a 1 in 4 success rate.

I think if anything, what this exercise has can help show is that maybe consensus rules above all. Thinking of being bold and grabbing the dark horse no one else is even considering? Maybe there is a legitimate reason most aren't considering them. See that hot shot prospect seemingly passed on by every other squad? Maybe there is a reason for that too. All that said, it doesn't mean you shouldn't be afraid to stick with your guts. There are guys who fell 6 spots and turned out pretty great (Kopitar, Zajac). Similarly, there are also guys who would be considered reaches who have turned out pretty well themselves (Karlsonn, Eberle, Couture). There is no golden rule when it comes to drafting but each piece of the puzzle can only help make the picture that much clearer.