Why Some Older Players Decline and Some Don't 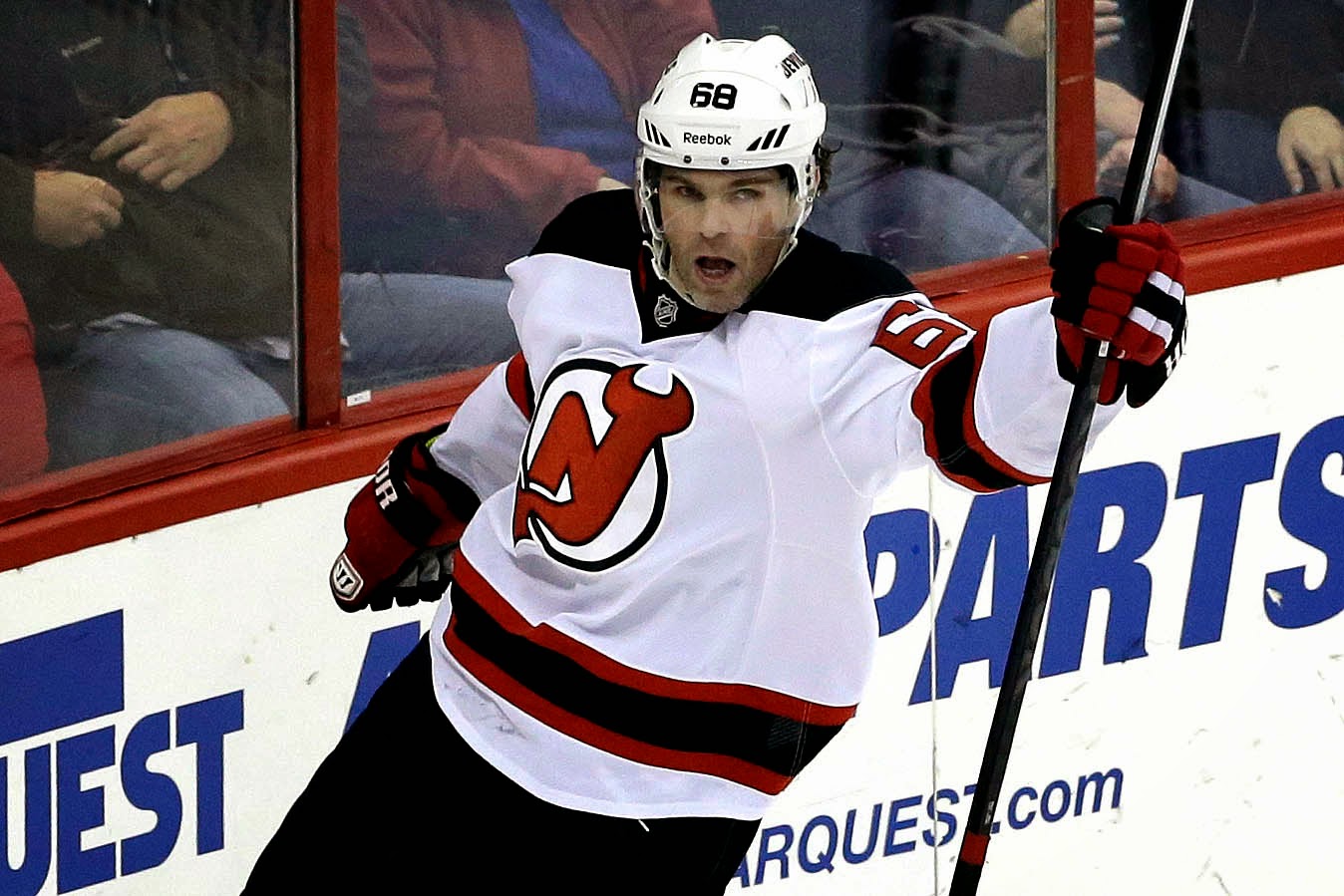 Sports are a continuous cycle of torch passing from the old to the young, veterans to rookies. The living embodiment of turning back the clock in the NHL is none other than Jarmoir Jagr. The 42 year old Czech seems to defy all odds and assumptions of how a hockey player is supposed to age. The average player typically peaks around their age 24 season and than can expect to either be out of the league or a major hinderance on their team's performance by about 35. Jagr however has altered his own game to still be an effective player in these later years even when his body won't allow him to play the same style he did in his prime.

Typically in a player's later years they seem to fall into two categories, those who simply aren't good enough to stick in the league and the stars who seem to never age (see. Jagr, Chelios, etc...) This brings me back to considering why some players, and even previous superstars, age more gracefully than others.

I have developed a few test case to in hopes of discovering some noticeable trends. Now let's look at the four subjects I settled on for this test case. All of these are currently older players but I chose two that many would say have aged well (Jaromir Jagr and Joe Thornton) versus two players that have not aged so gracefully (Vincent Lecavalier and Dany Heatley).

I decided to use dCorsi in this analysis to look at a player's contributions to possession. For those unfamiliar with the stat, they can read up on it more here. It is probably the most accessible and peer reviewed context neutral possession metric available. I prefer to use it in circumstances like this when we are comparing multiple players across various teams and seasons.

Below is a dCorsi aging curve. As you can see there is no clear pattern here that would dictate to us that a player's age has an effect on their dCorsi rating. This actually makes intuitive sense when you consider that dCorsi itself is designed to account for a player's age in the calculation. Also, the age coefficients aren't substantially big when compared to the other regression coefficients so I wouldn't read too much into the dCorsi taking age into account. 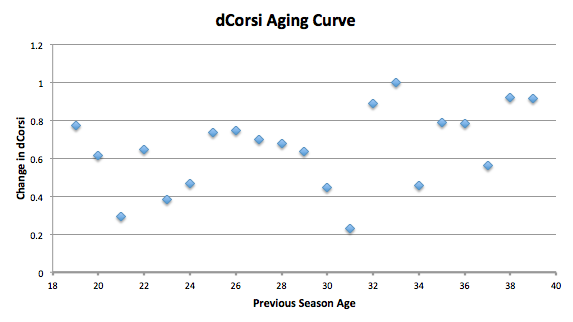 Now for the test case subjects, from the graph below you can see that a player's possession skills do not tend to vary with age. Thornton and Jagr have always been above average to great possession players where as Heatley and Lecavalier have more or less never been able to hold their heads above water. (***Remember that Jagr didn't play in the NHL between his age 35 and 39 seasons, so try to ignore that line there). 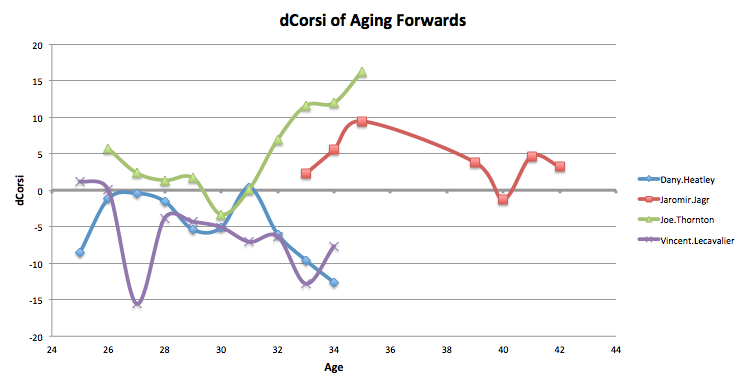 Next I am going to dive into player production. Each of these player's at one point in their career were excellent goal scorers (save Thornton whose has always identified as more of an elite playmaker). So instead of simply just looking at goals scored I broke it down into two lesser components, how many shots a player takes and what percentage of those end up in the back of the net.

Below is an aging curve for a player's shooting percentage (try to ignore the tails as I think thats simply just a mistake on my part rather than any relevant information). This aging curve looks very similar to that of dCorsi in the sense that we see little to no evidence of age having a significant effect on shooting percentage. 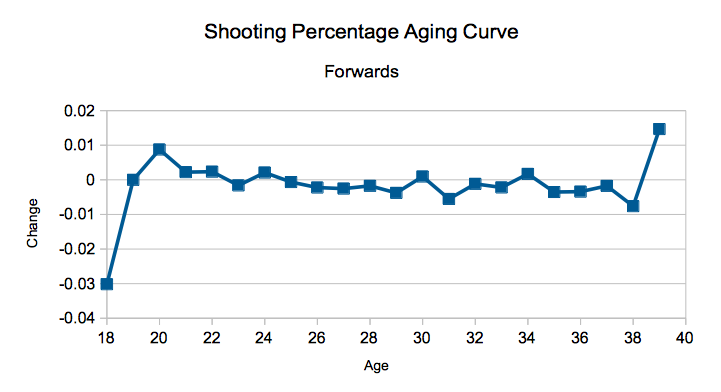 Once again lets see if anything can be gleaned from the aging curve and applied to our test subjects. There seems to be a lot of minor variance from season to season but still no real identifiable trend. Thornton and Heatley seem to have shown minor signs of aging but when you consider that they both still convert shots at a higher than rate than NHL average it is hard to argue that age has severely hindered their ability to efficiently convert shots into goals at an effective rate.

When it comes to goal production the other half of the equation is shot quantity. Typically the more shots a player takes the more goals they score. The aging curve for shots per game really starts to show us the extent that age can have on a player. You can see that a player's shot rate peaks around their age 24 season and then only proceeds to get worse after that.

Some of you might be wondering why shots per game produces such a nice curve when a player could theoretically buck the system by just firing shots to the net at will. That simply isn't practical in a real world sense. While it possible that a player might just fire shots at random, no player simply takes a shot just to take it. Every shot is taken with a specific purpose in mind whether that is to try and score, create a rebound or simply get an offensive zone face-off. Therefore as a player's individual shots decreases we tend to see their specific role and ability to positively contribute to their team's offensive begin to decline. 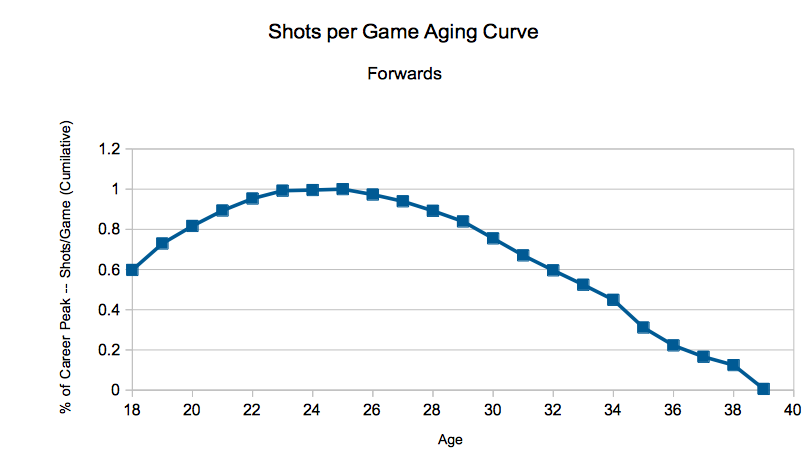 The controlled study below shows essentially exactly what we would expect to see based on the aging curve above. Each player's individual shooting shows a significant drop off with age. Previous snipers Heatley and Lecavalier see their shot rates plummet. Jagr's rates are not what they were when he was younger and have actually gotten better in recent years which explains his continued ability to contribute positively. Thornton is an interesting case since he has never truly been a shooter at any point in his career, therefore contributions come from his elite playmaking which helps explains his always low shooting rate.

Finally we will look at assists to see how much we can attribute each player's drop off to that of losing a playmaking edge. There seems to be a steady declining pattern here which would make sense considering the rule that player's tend to get worse as they get older. The drop however doesn't appear as drastic as that shown in the Shots/G graph with the aging process having less drastic effect with regards to assists. We also get to see where Joe Thornton retains much of his production value, compared to the rest of the group. 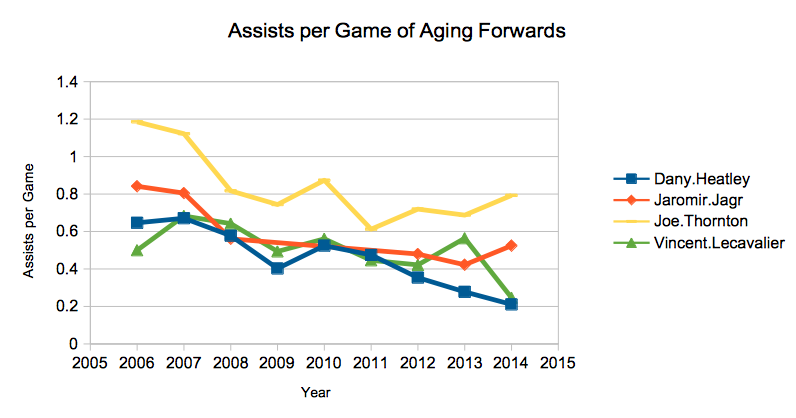 Projecting player performance is never easy but from this exercise some helpful insights might be gleaned.

Therefore, when signing older forwards it is imperative that their ability to control the ice regardless of their production rates must be taken into account. Possession seems to age the most gracefully and will provide a team with most value once their production seems to run dry. This ideology looks favourably on a player like Marian Hossa who has continuously put up dynamite possession numbers. I would however, preach wariness on an aging player like Martin St. Louis who has never truly been a possession star and sees most of his value come from high production numbers that we should expect to decline sooner rather than later.