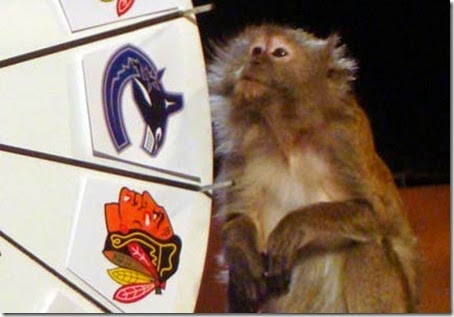 The start of the new NHL season is right around the corner and with that I present my first instalment of the Maggie Projections for the 2014-2015 season. Essentially these are projections for the the upcoming NHL season based on the system developed by Tom Tango for baseball about a decade ago.


It is the most basic forecasting system you can have, that uses as little intelligence as possible. So, that's the allusion to the monkey. It uses 3 years of MLB data, with the most recent data weighted heavier. It regresses towards the mean. And it has an age factor.

Tango named his system Marcel after Marcel the monkey due to the idea that they're so basic a monkey could do them. In order to avoid any potential confusion and add a little hockey flavour and have affectionately named these projections after Maggie the Monkey. A quick history lesson for those who may not know, Maggie the Monkey was a reoccurring guest on TSN during the playoffs in which she would spin a giant wheel to predict playoff rounds. I think it was a brilliant display of the randomness of hockey and the unpredictability of the small sample tournament Stanley Cup Playoffs. Her record was pretty impressive all things considered, (I must remind you, it's a monkey spinning a giant wheel) she was 50% on her career and 53.33% before her tough last season.

I may look to try and improve on these projections at a later date by adding on new stats and adjusting the projections with some tweaks here and there. Reminder, I do not stand behind these forecasts as this is essentially one big formula that I have taken and applied to hockey with no subjective input from me at all. (Credit to Rob Vollman's player spreadsheets for my data)

To save people some time, please use the following format for all complaints:
<player> is clearly ranked <too high/too low> because <reason unrelated to Maggie Projection system>. <subjective ranking system> is way better than this. <unrelated player-supporting or -denigrating comment, preferably with poor spelling and/or chat-acceptable spelling>


So without further ado, here are the Maggie Projections for the 2014-2015 season.