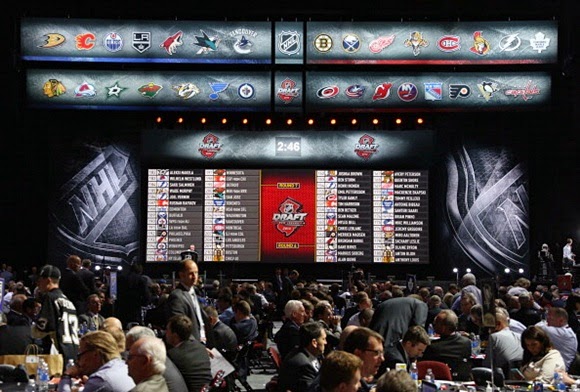 Drafts have always been a mystery in the sporting world. The number of teams relying on the draft to build their teams continues to rise in an era of delicate salary caps and bigger, stronger, faster athletes. Evaluating and projecting young athletes is far from an exact science to say the least. Look back at the 2007 NHL Entry Draft when the Pittsburgh Penguins selected Angelo Esposito 20th overall while the Dallas Stars were able to pick up future captain Jamie Benn with the 129th pick in the 5th round. In hindsight the mistake's seem obvious but this is hardly the standard, as you can see in the graph below earlier picks tend to yield much higher success rates than later selections. 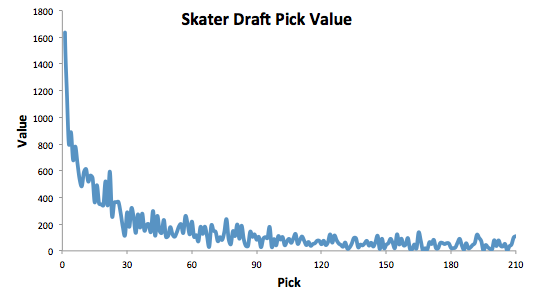 Goalie's as it has been well documented in the past, are slightly less predictable to say the least... 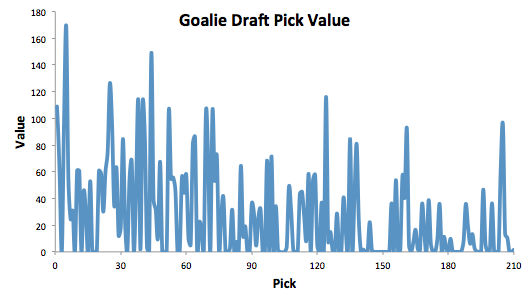 In order to come up with my values, I gathered each draft pick going back to 1970 (when the draft really started to resemble what it is today) and looked at each player's Point Shares only during their first seven seasons in the NHL. I fully recognize that catch-all statistics are not perfect evaluations of a player but they are probably the best available statistics for judging large numbers of players throughout history. I chose Point Shares over GVT mainly because Point Shares cannot be negative, GVT on the other hand can be negative which causes difficulties when comparing certain players. Example, how do you value a player who makes the NHL and records a negative GVT against a player who never played an NHL game and therefore has a zero GVT? Should that player be counted less even though many would argue they were probably a better hockey player? It is a tough question but thankfully Point Shares doesn't share this issue.

Looking at only a player's first seven years rather than a players full career accounts for the assumption that when a team selects a player in the draft they are only guaranteed at most 7 years of that player's services before they hit free agency (3 years from their rookie contract and then 4 years of their RFA rights). I then fitted this data with a logarithmic curve to smooth the data to show the sharp drop off in value from the first picks followed then a more gradual drop for the later picks.

In the future I hope to replicate and build on Eric T.'s work found here regarding the market value of a draft pick. Where as my values were based on draft results, Eric based his on the market rate as determined by team trades. Comparing the two methods could provide some insight into what spots in the draft might be over or undervalued by teams relative to their actual expected value.

Below is the grid for comparing the individual value of each pick. Reminder that these value's are arbitrary numbers and should only be used to compare draft slots and not any players involved in a potential trade. This once again is an approximation many years of data and in no way a hard rule of how every pick should be valued. Enjoy!

You can reach me via email me here: DTMAboutHeart@gmail.com or via Twitter here: @DTMAboutHeart
at 17:01